The Monsters in Our Midst 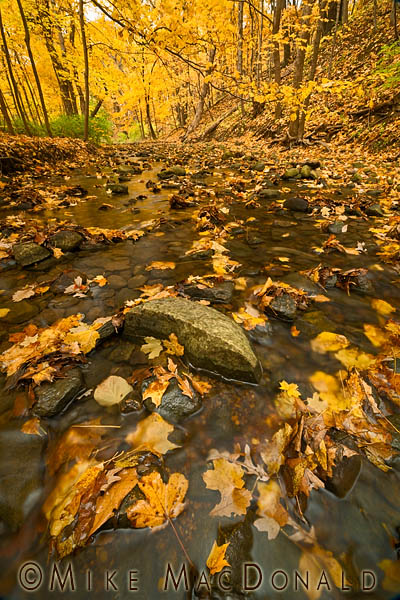 At Black Partridge Woods, invisible raindrops plummet from the gray onto a canopy of yellow sugar maples, dislodging turning leaves from their tentative grasps and sending them into a lighthearted aerial choreography destined for the moving stream, where the water ride begins. Here, leaves are taken on a winding, whirling adventure, following the will and whim of the fickle current, gliding with ease around branches and rocks, then twirling, as the tip of a lobe glances the side of a mossy stone. Sometimes they’re snagged by twigs, as if nabbed from the shore by the out-stretched arms of rescue workers. Many seem to come to rest with others of their kind, wedged against a rock in an angular heap like a jumbled pile of playing cards. And happily, a few flow over my boots and between my legs as I crouch in the middle of this rocky stream, where meditative music of the cascades flood the sweet autumn air. All is a dream. But, this being the season of Halloween, a nightmare lies in wait. A demon hides in plain sight.

“La, la-la, la-la!” we sing, as we frolic through a grove or a field of flowers, oblivious to the monsters that lurk: the alien plant species. No, they are not pursuing you. (Or are they?) I mean, heck, they’re just plants, what harm can they do, right? A lot, it turns out, as fatal as a murderous scene from a horror flick, except that the stranglehold takes place over years, decades. Ignored, incognito, and beautiful to the eye, the aliens creep. But, their beauty is only chlorophyll deep. Slowly, diabolically, they take control and annihilate our native species, severing the fragile filaments that make up the web of life. Sound bad? Well, that’s what will happen in this wonderful place, if we ignore the monsters in our midst.

After years of photographing local nature, I’m still not privy to every Franken-plant. Yet, I suspected something sinister, knowing that autumn gives warning by revealing a horror in hiding: European buckthorn, with foliage that remains green deep into the fall. Along the roads, neighborhoods, and natural areas, it stands apart from the golds, burgundies, and browns. Buckthorn seems to be everywhere, providing a sobering realization of how badly our preserves have been infested and the work that remains.

In the picture, the distant greenery is not buckthorn. I checked before I shot it. Afterwards, though, haunted by the green monsters of the fall, I got an eerie feeling. If change is the message of the season, then it’s possible that other aliens did not received the memo either. I called the steward of the site and my fears were confirmed. The shrub you see is that of another demon, as vicious as buckthorn, and one that, up until that point, was unknown to me, the alien Japanese honeysuckle.

So now I know and so do you, but beware. Complacency is the most dangerous monster of all.